Using the symbol of a sailboat, John Mark uses references from ACIM and other sources, to outline some stages of the spiritual path.  The process of “undoing” can bring disorientation as we recognize the valuelessness of what we once held dear.  Attempts to direct our awakening under the efforts of our own mind will soon leave us adrift, and will increase the disorientation.  It can feel like a ship caught in a windless doldrum.  Rather than becoming depressed, or abandoning the path, we can see this as an indication that we have neared our final act of willfulness, which is … Read More >

If there were a special relationship that was prohibiting your awakening and you didn’t even know what it was, would you want to know? In this dialogue, John Mark reminds us of the nature of special relationships and the Holy Spirit’s role of restoring them to the function God gave them. Then through the use of an audio clip from Raj/Jesus and a movie clip from “Revolver”, he brings us face to face with our most cherished special relationship. On the night it was first recorded, the answer brought the room to a stunned silence as those present felt their … Read More > 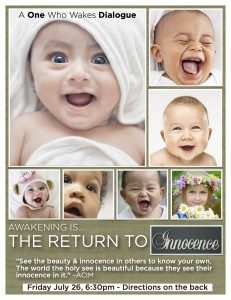 We look in an infant’s face and feel awe. A baby smiles at us and we instantly smile back. A toddler laughs and we delight. The baby even cries in perfect innocence. We are deeply moved by the presence of innocence. What if we knew that the innocence we attribute to a child was merely the reflection of the original innocence in which God created us? What if we knew, in the depth of our soul, that we remain in that original innocence NOW? It is our nature, our identity, our Being. In this dialogue, John Mark reminds us of … Read More > 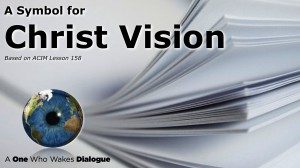 Have you truly considered what God sees when he looks at you? The mind may first offer the “correct” answer by saying He sees perfection, or innocence, but then it will remind you of some flaw or failing, and thus is revealed how you see yourself. In this dialogue about Christ Vision, John Mark provides the symbol of a blank sheet of paper to remind us of the pure, and fully allowing Consciousness that is our True Being. We write our story – any version we choose – on this blank sheet of paper. All is accepted, all is allowed, … Read More >

This illusion lingers because we think we are less than everything. We would not be in the experience of the dream unless we believed we were lacking, and the world held something that could make us whole. And so we search for idols, seeking what must fail, in complete denial of Truth. God dwells within, and our completion lies with Him. Our holy minds are alters unto Him, and where He dwells no idols can abide. John Mark shares examples of his own search for idols and the inward journey that brought him home to Heaven, the only place where

Since John Mark’s awakening, many people have asked, “What’s it been like? How has your life changed?” John Mark and Cindy share their story of the before and after experience. They identify some of the pitfalls of the Special Relationship, whereby we seek fulfillment in another, and the freedom found when one remembers the Holy Relationship which is union with God. Join them for a candid Question and Answer session, filled with laughter, a few teary moments, and ending in joyous dancing. This dialogue was recorded March 15, 2013. Click this link to watch on Vimeo. … Read More >